Click the video above to hear a wrap-up of the Canberra Delegation from Townsville Enterprise Interim CEO, Wayde Chiesa

A key takeout from our Unlock the North delegation to Canberra last week was that both the Government and Opposition consistently acknowledged the key role the North has and can continue to play in the nation's COVID-19 recovery.

This message was reinforced across all meetings with Senators, Ministers, and Shadow Ministers by Townsville Enterprise, our regional mayors and business leaders whilst we promoted the priorities included in our 2021 Federal Budget Submission. As a part of these discussions, we spoke of North Queensland's strategic strengths in terms of the natural resources sitting in our backyard, capacity to generate energy, as well as our geographic advantages and capability as the home of Australia's largest Defence base.

This was a a key theme articulated to the delegation by Prime Minister Scott Morrison during our meeting with the PM on Thursday, specifically indicating his firm focus on securing Australia's supply chains, particularly critical minerals and agriculture, which he acknowledged plays to the North's strengths.

The engagement and enthusiasm from both major parties towards our document and unified approach to advocating for North Queensland as one voice was an encouraging sign that our region is heading in the right direction. The assistance and support from our local Federal representatives only strengthened the platform we were putting forward, being joined in nearly all government meetings by Member for Herbert Phil Thompson, Senator Susan McDonald and Member for Dawson George Christensen. Whilst the Unlock the North delegation was a loud voice for three days in the halls of Parliament House, these three voices are consistently making noise in Canberra on behalf of North Queensland businesses and the community.

It's important to note that these delegations are not about guarantees, immediate answers, or blank cheques, but instead ensuring all sides of the political landscape are well aware of the critical issues and the opportunities in the North. Our 22 meetings over three days were exceptionally positive and productive in delivering the united message that with targeted policy and investment North Queensland can play a key role in the post-COVID economy.

If you missed any of our on the ground updates from Canberra last week, click HERE to catch up on specific discussion points and outcomes of each meeting

Click the images below to view each print, broadcast and social media clip wrapping up the Canberra delegation, including today's Townsville Bulletin article; last night's 7 News Townsville and Win News Townsville stories, and a range of Facebook, Twitter and LinkedIn posts from Senators, Ministers, and Shadow Ministers following our meetings across the week. 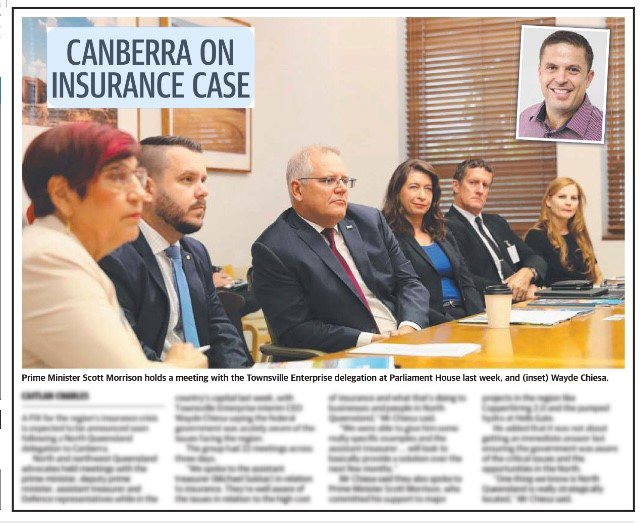 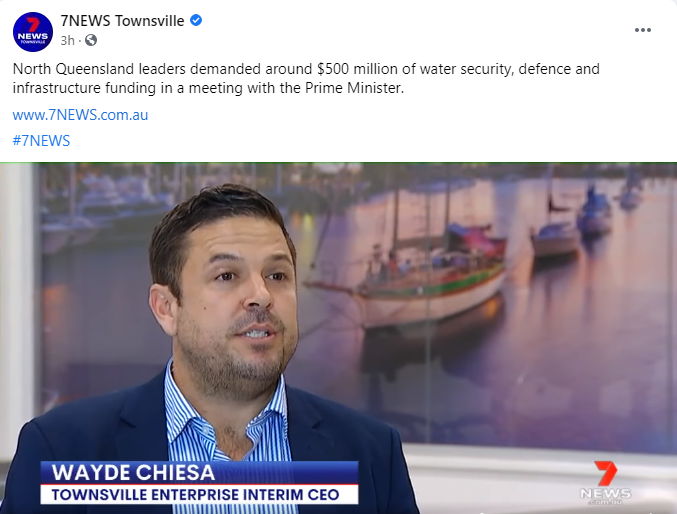 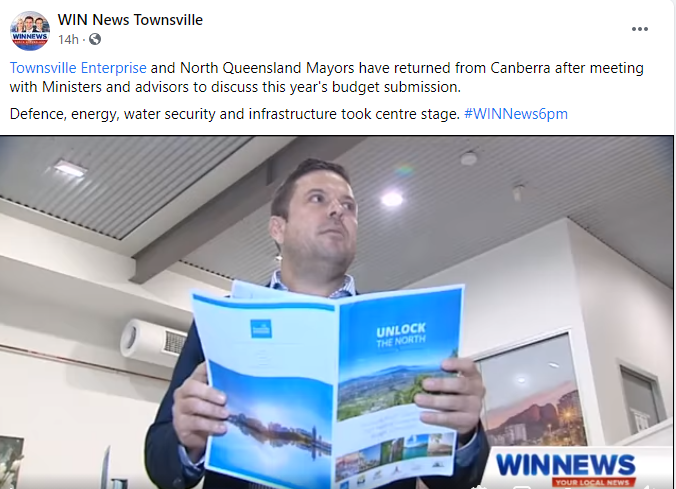 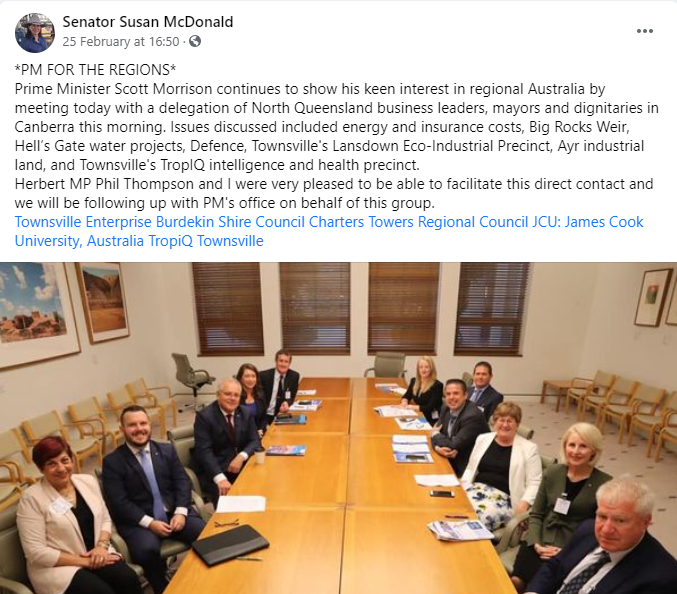 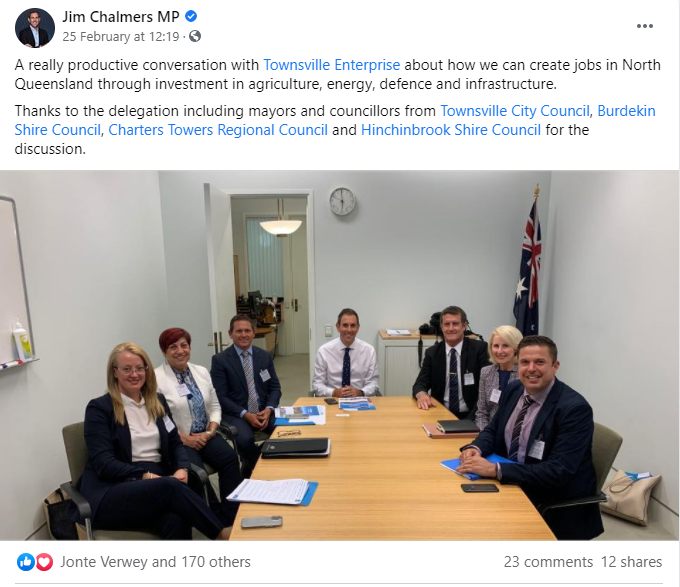 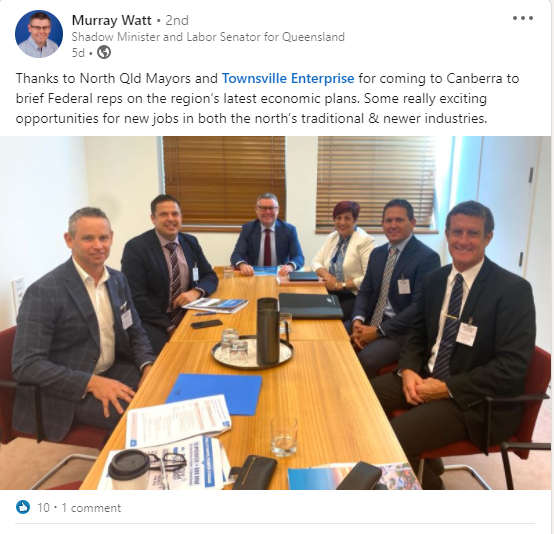 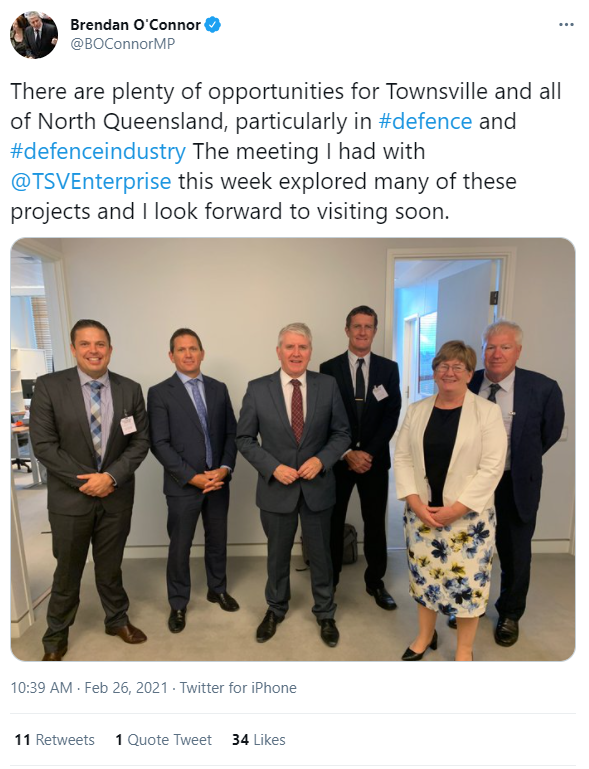