FOURTH AND FINAL WEEK WRAP UP

We are now one day away from official polling day and what a four week campaign it has been. North Queensland has certainly been front and centre of the hustings from when the starter's gun fired on Tuesday 6 October right up until here today on election eve.

The spotlight we’ve seen on Townsville and the North is testament to our business and community’s advocacy efforts well in advance of this election, and as we look to our election priorities and commitments received, we see a lot of green lights for our region.

We’ve seen the Premier, Deputy Premier, Opposition Leader, Katter’s Australian Party Leader and countless Cabinet and Shadow Cabinet Ministers visit Townsville and North Queensland almost daily across the past four weeks. This fourth and final week has been no different with all three leaders starting their last week of the election campaign on the hustings in Townsville.

With each visit we have welcomed a raft of commitments to our region’s priorities. Many of which have been a key part of our advocacy agenda for a number of years and highlighted in the Unlock the North document we launched with our regional council partners and TaskforceNQ at Parliament House in August.

Importantly, over the course of this campaign period much of that support announced for North Queensland projects has been bipartisan. Both major parties have committed to building Big Rocks Weir, progressing CopperString 2.0, boosting our tourism marketing funding, Townsville Hospital infrastructure upgrades, reducing irrigation costs for famers, Magnetic Island road upgrades, the Museum of Underwater Art is now fully funded and Glencore's door will remain open. This means that no matter who forms government after tomorrow, these projects and policies are secured for the north and that means jobs for our community. 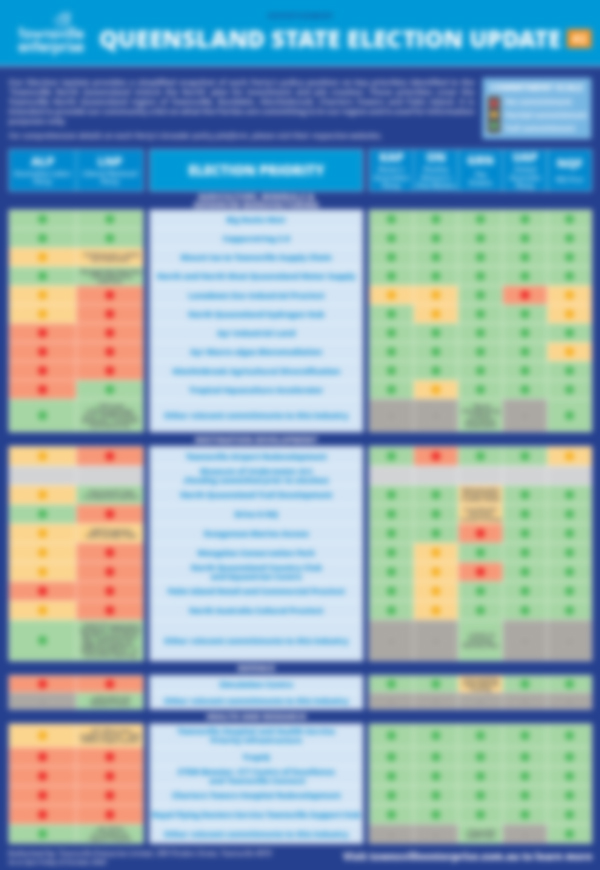 The Election Update we’ve been publishing in the Saturday Townsville Bulletin over the past few weeks is a clear indicator of which projects and policies have and have not been greenlighted by parties. This table reflects the current commitment status provided to Townsville Enterprise by Labor, LNP, KAP, One Nation, Greens, and NQ First towards the priorities in our Unlock the North document.

From a project and policy perspective, it's good news for our community as the green lights we've received aren’t just commitments from the major parties but importantly also from the other parties if they are in a position to influence the next Parliament.

Our message to all parties is that even as we continue to work on the rest of the pipeline for the future, our expectation of these significant commitments in this election is nothing short of full delivery. We will hold whoever wins accountable to their commitments – no wriggle room – and that’s a message that applies equally to every party.

The final update on the commitment status from each party will be published in tomorrow’s Townsville Bulletin. Click HERE to download last week's update.

We thank all incumbents and candidates representing the electorates across our region for their engagement with Townsville Enterprise in lead up to the election and during the campaign period. We also wish to acknowledge the Premier, Opposition Leader and KAP Leader for their engagement over the past three years. We wish them all well on polling day and look forward to hitting the ground running with our elected representatives, the State Government and the entire 57th Parliament of Queensland.

Please scroll down to view what was announced this week and if you've missed any of our updates across the campaign and for a recap on all the commitments made to our region, click the following links for WEEK 1, WEEK 2, & WEEK 3.

WHO WAS HERE THIS WEEK?

WHAT DID THEY ANNOUNCE?

Premier Annastacia Palaszczuk begun week 4 of the campaign in Townsville on Sunday, travelling south along the coast to Bowen, Airlie Beach, Mackay, and back to the South East. Across the week the Premier announced:

Opposition Leader Deb Frecklington also started the final week of the campaign in Townsville, before moving south to Mackay, Rockhampton and onto Brisbane, announcing:

In Townsville at the start of the week, Katter's Australian Party Leader Robbie Katter announced he will:

Click HERE or on the play button to the right and skip to the 45:07 mark to listen to Michael's interview with Trish in full.

IN CASE YOU MISSED IT

MAJOR PARTY COSTINGS
Both the ALP and LNP this week revealed the costings to fund their election commitments. Treasurer Cameron Dick announced Labor would borrow $4B to pay for its commitments and Shadow Treasurer Tim Mander announced the LNP's election promises calculated at just over $5B, offset by an estimated $3.4B in savings. A reelected Labor government has promised to hand down a budget the week beginning 30 November, and if elected the LNP will deliver its budget in the first 100 days.

DEBATES
On Wednesday, Sky News and the Courier Mail held the 'People's Forum' Debate between Premier Annastacia Palaszczuk and Opposition Leader Deb Frecklington. The debate gave undecided voters in the audience the chance to pose questions to the two leaders live in Brisbane. Click HERE to watch how that encounter unfolded. The Leaders also went head to head again today at the Queensland Media Club in Brisbane for the final debate of the campaign. Here they were posed questions by our state's leading political journalists and also from each other. You can watch a replay HERE.

We have also seen the final candidate debate for our region's electorates, which was rounded out with the seat of Traeger between the incumbent Robbie Katter Leader of the KAP and the LNP candidate, Marnie Smith. You can find that debate at the Townsville Bulletin's website HERE along with any other debates you may have missed.

PRE POLL UPDATE
As of Thursday 29 October, over 1 million Queenslanders had already cast their vote at pre-poll booths, with a further 900,000 set to vote via postal application. If you're not one of the over 60% of the state that has either pre-polled or postal voted, you can find your nearest polling booth for tomorrow by clicking HERE.

Today the Premier and Chief Health Officer (CHO) announced that the Queensland border to 32 Local Government Areas of Greater Sydney and the whole state of Victoria will remain closed, but reopen to all other parts of NSW from 1am 3 November.

People in Greater Sydney will be allowed into Queensland provided they have spent at least 14 days out of the NSW hotspots without testing positive to COVID-19. NSW residents in the expanded border bubble will be permitted to travel into Queensland via Sydney Airport but will need to travel through Sydney without stopping. Click HERE for more information and the list of the 32 restricted areas.