The commencement of week 3 of the State Election campaign comes off the back of a busy weekend for the majors both holding their official campaign launches in Brisbane, and for us in North Queensland we welcomed a significant announcement towards a key project in the region as well as a funding commitment to support Queensland's tourism industry.

On Saturday, Opposition Leader Deb Frecklington announced that if elected the LNP will provide $30M towards the construction of Big Rocks Weir at Charters Towers. Securing bipartisan support to this first stage of the Hells Gates Dam project is a significant milestone for the Charters Towers community by securing a guaranteed water supply, and opening up 3,000 hectares of new irrigated agriculture in the North West.

This commitment now joins Labor's announcement to match the Federal Government’s $30M which was committed by the Prime Minister and advocated for by the Member for Kennedy, Bob Katter. This project is now fully funded.

Over the weekend, Labor announced a $74M election commitment to the tourism industry, which includes a "special one-off funding injection to Regional Tourism Organisations". 'The 'Rebuilding Queensland Tourism' plan is a welcomed announcement in the wake of the ongoing challenges operators continue to face from the impacts of COVID-19 and has been a key part of our advocacy for the recovery of North Queensland's tourism sector. We look forward to further detail on this announcement in the coming days and sharing our plans with you as to how this funding will bolster our marketing activities to promote the destination and support local tourism jobs.

Both Labor and the LNP officially launched their election campaigns in Brisbane on Saturday, with Premier Palaszczuk committing to introduce voluntary assisted dying legislation to Parliament in February, as well as announcing a $21M initiative to provide free TAFE courses and apprenticeships for under 25s for in-demand jobs in agriculture, manufacturing, healthcare, early childhood education, aviation, electrical and automotive, and $40M towards establishing new advanced manufacturing hubs.

During the LNP's launch, Opposition Leader Deb Frecklington discussed her economic plan to create 150,000 jobs, no new taxes, and reaffirm the Party's announcements and focus on resources, dams, manufacturing, Defence and health. 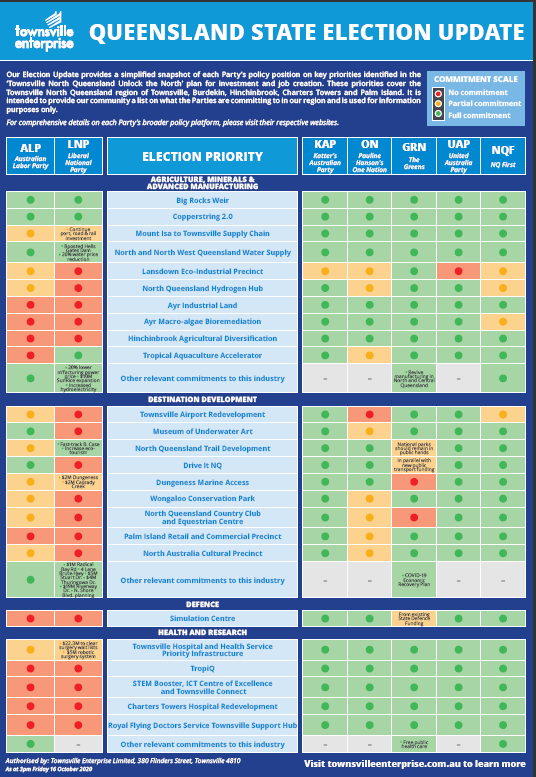 We published our first 'Queensland State Election Update' in Saturday's Townsville Bulletin to provide a simplified snapshot of each Party’s policy position on priorities identified in the ‘Townsville North Queensland Unlock the North’ plan. The table outlines the current status towards those projects and policies of either Full, Partial or No Commitment from ALP, LNP, KAP, One Nation, Greens, and NQ First.

We thank all the parties for providing a response to Townsville Enterprise for this first update, which will be appear again in this Saturday's paper with any additional announcements made across this week.